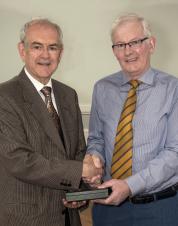 Cllr Williams, who represents Stretton ward, was voted-in at the council's annual meeting held on Monday May 13.

It was the first meeting of the newly-elected council, which now comprises 18 Liberal Democrat and two Conservative members.

The meeting was opened by out-going chairman Cllr Stan Rooney, who invited all Members to stand for a minute's silence in memory of former Parish Council Chairman Cllr John Moore, who died in April.

Cllr Rooney said: "John's considerable presence, chairing skills and wisdom will be remembered by us all."

The former Sketchley ward councillor then handed over the Chairman's chain of office to Cllr Williams, saying: "I have enjoyed my four years as chairman. It has been very productive. Significant improvements have been made in this parish and I hope this will continue."

New Chairman Cllr Williams said: "I would like to record my personal thanks to Stan for his Chairmanship. He has put in a tremendous amount of effort over the past four years and it is much appreciated."

Cllr Williams added his thanks to all other outgoing councillors for their effort and work over the past four years.