Hollycroft Park, Hinckley, is voted one of the best in the country 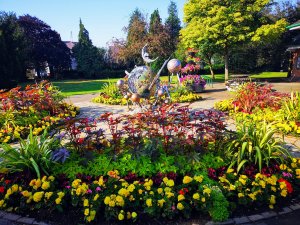 More than 45,000 votes cast as the nation picks the best of British – Hollycroft Park, Hinckley winner of 2019 People's Choice vote.

Today, Green Flag Award is announcing the winners of the 2019 People's Choice vote.

With more than 1,800 sites to choose from – all of which meet the standards demanded by the international Green Flag Award programme – the public have chosen their ten favourites.

Paul Todd, Green Flag Award manager, said: "We know that parks matter to people and that receiving a Green Flag Award brings a real sense of achievement and pride to staff, volunteers and the community"

"The number of people that took the time to vote for their favourite park is testament to how much these spaces are valued and we congratulate this year's top ten."

Parks and Green Spaces Minister Viscount Younger said:"Britain's parks and green spaces are peaceful havens for people of all ages - places to meet neighbours, find relaxation, to exercise and learn about nature and the environment.

"It is fantastic to see so many people support and cheer their favourite parks every year for the Green Flag People's Choice Awards.

"These awards celebrate the dedication of all those in the community who work tirelessly to ensure the whole community can enjoy the best of what our parks have to offer. Thank you and congratulations to everyone behind this year's favourites."

The ten winners of the 2019 People's Choice Award are (in alphabetical order):

Leader of Hinckley & Bosworth Council Councillor Stuart Bray said: "Fantastic news, thank you to everyone who has voted for Hollycroft Park. To be recognised as one of the top ten favourite parks in the country rightly recognises the amazing contribution of our staff, the Friends of Hollycroft Park and all our volunteers and the visitors who make this park such a great place to visit at the heart of our community.

"This vote is the result of years of dedication from a large number of people - it does them all credit. For the past ten years the park has a received a Green Flag Award but now to have been selected to receive for the first time a People's Choice Award is a great accolade. It highlights how important Hollycroft Park is to the local community.

As a borough Hinckley and Bosworth has lots of excellent green spaces and with this award we hope further visitors will come and explore what our area can offer."

Councillor Jas Athwal, Leader of Redbridge Council, said: "It's fantastic news that Valentines Park has been voted in the top ten favourite parks in the country. We are so fortunate to have so many beautiful green spaces and play parks all around the borough and I'm really pleased that our commitment to and continued investment in providing the very best parks for our residents to enjoy has been recognised once again.

"This really is testament to all of the hard work of our parks team at Vision RCL, as well as volunteers and residents who contribute so much to make this park one we can all be proud of."

Electors urged to make sure they are registered to vote burbage-council.co.uk/…