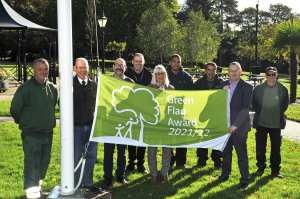 Two Hinckley parks are officially once again among the best in the UK after they were each awarded a much coveted green flag - a prestigious accolade that is only awarded to the very best parks and green spaces in the UK.

Plus in a double celebration for the town, Hollycroft Park has also been awarded a Green Flag - the twelfth year that Hollycroft's environmental excellence has been acknowledged by the scheme.

The two award winning parks are two of the 2,127 sites across the country to collect the award for 2021.

The Green Flag Award scheme, celebrating its Silver Jubilee, is managed by environmental charity Keep Britain Tidy under licence from the Ministry of Housing, Communities and Local Government, recognises and rewards well-managed parks and green spaces, setting the benchmark standard for their management across the United Kingdom and around the world.

The award is a sign to the public that the space boasts the highest possible environmental standards, is beautifully maintained and has excellent visitor facilities.

Councillor Bill Crooks, the Borough Council's Executive Member for Street Scene Services, Parks and Open Spaces said: "This award celebrates the dedication that goes into maintaining Argents Mead and Hollycroft Park to such a high standard.

"Thanks are due to the staff at the council, and in particular, the Friends of Hollycroft Park Group, for their dedication and hard work that has helped Hollycroft Park to get this much deserved award once again."

"To meet the requirements demanded by the scheme is testament to the hard work of the staff and volunteers who do so much to ensure that these two Hinckley Parks have high standards of horticulture, safety and environmental management and is a place that supports people to live healthy lives."

Carols Round the Tree