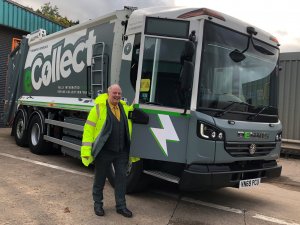 In the drive towards fossil fuel alternatives to power vehicles, the Borough Council is trialling an electric refuse and recycling bin lorry for waste collections this week.

The Dennis E-Collect Refuse Collection Vehicle will be with the council for one week and will collect garden waste bins in Hinckley and Burbage on Tuesday, Wednesday and Thursday.

On a single charge, it will pick up waste from around 1,100 properties during a single day, before travelling to the local farm composting site where the garden waste is tipped and then composted. Once the round has been completed, it will be recharged at the council's depot in around seven to eight hours.

The fully electric lorry has five battery packs which will give the vehicle 300kWh of power and a 200kW electric motor. The lorry will be much quieter than a traditional vehicle and weigh around 26 tonnes.

The emissions from the fleet currently make up over 40% of the council's emissions and reducing them is critical to achieving the council's net zero carbon ambitions. The council has already committed to assessing any infrastructure improvements that may be necessary to move to greener alternatives.

Cllr Martin Cartwright Executive member for Climate Change at Hinckley and Bosworth Borough Council said "We are getting more used to seeing electric cars on the road but as yet not electric refuse trucks.

"Moving weight over distance presents challenges, it was great to see and ask questions from representatives of Dennis about their electric refuse truck. This trial is a short one only lasting a few days but vitally important to us as a Borough Council to see how it performs out there in real life.

"Further trials will take place but from what I saw this will undoubtedly the way forward. I would also like to thank all our crews for the first class service they provided to our residents especially throughout the pandemic. Look out in Burbage and Hinckley for this Grey electric demo refuse vehicle as you are far less likely to hear it than our current fleet."

Borough Council waste and recycling collections will be made from 6am from Wednesday August 10 onwards due to forecast heatwave conditions. Please remember to put out your bins in time

Burbage PCSO Stretton has released his latest policing update. It can be read here burbage-council.co.uk/…

The August edition of Our News, the Neighbourhood Watch newsletter, is out now. You can read it here ourwatch.org.uk/sites/…