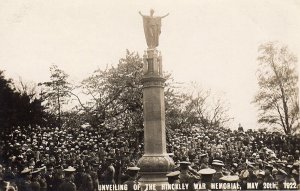 Descendants of bereaved mothers who took part in the ceremony to unveil Hinckley's War Memorial one hundred years ago have been found following a public appeal to trace them.

The families will attend a short ceremony in the Garden of Remembrance in Argents Mead at 10.45am on Friday May 20, one hundred years to the day since the memorial was first dedicated.

Members of the public are warmly invited to attend, along with members of the armed forces and local dignitaries.

In 1922 six bereaved mothers who had each lost three sons in WWI were invited to take part in the War Memorial's dedication service. Local historian Greg Drozdz had traced descendants some of the mothers to invite them along to the centenary event and following a public appeal, descendants of the remaining mothers have now been found and invited to attend.

Mr Drozdz was interested to discover that the descendants of the mothers all still live locally, four living in Burbage, one from Earl Shilton and one from Sapcote.

Mr Drozdz said: "With the clock ticking down to the commemoration on May 20th we have found the last family we were looking for in the nick of time. Through the detective work of Museum volunteer and family historian Jean Gilbert, we have traced descendants of the Dixon family. This will add greatly to the historic re dedication of the memorial."

Royal British Legion Standard Bearer Ian Walker, who is helping to organise the event with local historians and the Borough Council, has created a guest book to record attendance for posterity. This will then be placed in Hinckley Museum for use by future historians.

In a further echo of the past, local florists are creating a floral tribute representing the three armed services - the RAF, Air Force and Navy – along with a white cross covered in lilies inspired by the floral arrangement created for the original service.

Hinckley and Bosworth Borough Council's Armed Forces Champion, Councillor Danny Findlay added: "The memorial is the town's focal point for loved ones and a place where the community comes together to pay their respects for those servicemen who made the ultimate sacrifice for the freedoms we enjoy today. We warmly invite everyone, and particularly descendants of the fallen, to join us for this very special ceremony."

The War Memorial was built on part of Hinckley Castle, initially for those who died during World War one. Designed by John Alfred Gotch from Gotch and Saunders of Kettering, the memorial is an octagonal ashlar column is on a stepped base, which is surmounted by a bronze statue of a robed angelic figure with both arms outstretched with is the Angel of Mercy.

In November 1951 additional panels were added bearing the names of the people of Hinckley who lost their life during World War II.

Today the memorial honours everyone from Hinckley who fell in the major wars and conflicts of the twentieth century.

There is a great deal of information about the fallen remembered on Hinckley's war memorial on an archive published on Hinckley and District museum's website, called 'Nobody Told Us'. The archive represents 25 years research by Mr Drozdz using archive information as it became available, and it is illustrated with photographs and historical news reports to show the lost life that each fallen soldier represents. The archive is open to all to view at www.hinckleydistrictmuseum.org.uk