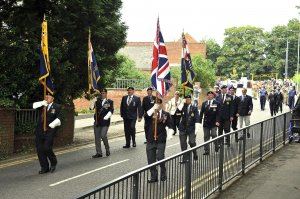 A SPECIAL service and parade will be held in Hinckley on Saturday 25 June to enable people to show their support for the Armed Forces in a combined event which also commemorates the 40th anniversary of the Falkland conflict.

Lasting 74 days, the Falklands War was the first military action since the Second World War that utilised all elements of the Armed Forces, with 255 British personnel losing their lives.

Organised by the Borough Council in partnership with the Hinckley combined Armed Forces and Veterans Community and Churches together the Hinckley Combined Ex-service Association, the event will include representatives from several regiments, nationalities, sections and services, including the local cadet forces.

Now in its 14th year, Armed Forces Day offers everyone a chance to thank the men and women who make up the Armed Forces community, from currently serving troops to service families, veterans and cadets.

At 10.45am a procession will leave from outside Jaspers and march down Castle Street and into Argents Mead for a service (11am), which will be led by Reverend Ian Hill from Churches Together. Afterwards the parade then makes its way down Castle Street and along Station Road where a formal salute will be taken.

A variety of military vehicles and memorabilia will be on display in Argents Mead for visitors to view, these are kindly supplied by Charnwood MVT (Affiliated to the Military Vehicle Trust) and their members. A walk about 'Captain Mainwaring' will also be in mead offering balloon modelling.

Hinckley & Bosworth Borough Council's Armed Forces Champion, Councillor Danny Findlay said: "This year as ever, offers an opportunity to highlight the sacrifices that were made for the freedoms that we enjoy today and to recognise the ongoing service that our Armed Forces undertake.

"The backdrop of Armed Forces Day 2022 is significant for the 40th Anniversary of the Falklands conflict, as well as more recent events such as servicemen and women supporting the national pandemic effort and now increased military deployments to Europe in the face of ongoing global security concerns.

"Armed Forces Day is both an opportunity to remember those who paid the ultimate sacrifice and a celebration for the steadfast service that our serving, reserves and veterans have given. The day offers the opportunity to consider the wider armed forces family such as those Cadet Forces, servicemen and women's families and civilian support personnel.

"Finally, I would both welcome and encourage citizens of Hinckley and Bosworth to come and support Armed Forces Day, previous events have been very well attended, with the historic vehicle collection receiving fantastic reviews."