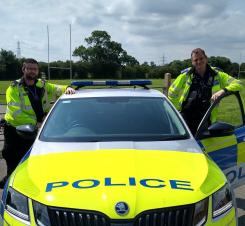 A Blue Ford Kuga has been stolen from Forresters Road, between the Sunnyhill and Far Lash junctions. The vehicle was taken from the driveway on the 10th of April sometime between 22:00 and 23:00. If you have any CCTV or Doorbell footage, please get in touch. This appears to be a keyless theft. Please consider steering locks, driveway bollards and RFID wallets. 22000204407. Darren.stretton@leics.police.uk

Attempt theft from a van on Garden Close overnight on the 8th into the 9th of April. Damage was caused to the passenger door and side door. Please be vigilant and report suspicious activity immediately to 999 or 101.

Product mark your items such as tools and bicycles. We have UV pens and Torches available from under a £2. Also consider registering your items free on https://www.immobilise.com/ .

These actions will help if we recover items during searches or found property.
Please remember to report crime immediately via 999 (emergency), 101 (non-emergency) or online as soon as you can with as much detail as possible to help officers deal with the incident. Having spoken to many residents over the years who did not call the Police when they really should have as "they didn't want to bother anyone", it is vital you do call Police to protect yourself, give us the opportunity to respond and help us identify those involved.

On the flip side, calls to Police asking for "a lift" are a waste of resource and could be preventing someone who really needs support from getting it. Luckily these calls do not happen to often.

A warning has been issued after a number of elderly people in the Hinckley area were the victims of fraud.
Seven reports have been received since 1 March where victims, with ages ranging from 71 through to 89, have been contacted by someone claiming to be a police officer from the London area.

In the majority of cases victims have been contacted by fraudsters claiming their bank cards have been cloned and to verify that their cards haven't been compromised they are asked to purchase high value jewellery or gold which suspects then arrange to be collected by a courier.

Due to the banks intervening, of the seven reports received four of the victims did not hand over any money or goods to the fraudsters.

The fraudsters sound very plausible and tell the victims not to inform anyone of their contact.
In one recent report, the elderly victim suffered complications of a mini-stroke during the incident due to the stress. This highlights the physical and mental harm that is caused on these elderly victims who are being coerced by the fraudsters.

There are various different scams used in an attempt to take money from the elderly and vulnerable.

In some cases, the victims have been contacted and informed that an attempt was made to access their bank account fraudulently. The fraudsters asked the victim to transfer the money in their account to another bank account they provide details for.

We know the people who are the most likely to be targeted might not have social media so we are asking people to share this information with elderly or vulnerable friends or relatives to make them aware.

Please be advised that police officers would never contact you in this way. If you are called you should disconnect the call straightaway and report the incident to the police using another telephone, as on some occasions calls can remain connected.

Occasionally suspects will use local taxi or courier companies, who unknowingly accept the job. We would ask that people remain vigilant and if they are contacted to collect packages be mindful of who they are collecting these from if they have any suspicions to report them to the police immediately.

Return parcel scam sent in by a resident to raise awareness.

"Just thought I would let you know that the "Return Parcel Scam" is still active and doing the rounds.
I received a notification at 02.40 this morning stating that the Post Office had tried to deliver a parcel on 11t. April.
Didn't think the Post Office delivered parcels, especially between midnight and 02.40".

Please take a look at the following rogue trader leaflet. Feel free to print and share with anyone who may not have access to the internet or to simply help raise awareness.