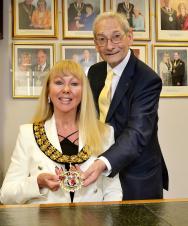 The following fact sheet has been issued to coincide with the election of Councillor DAWN GLENVILLE as Mayor of the Borough for 2022-23 at the Council's annual meeting on Tuesday 17 May.

Length of service: First elected to the Borough Council in May 2019.

Family: Councillor Glenville is married to fellow councillor Barry Walker. The couple moved to Burbage in 1988.

Work: After retiring as a professional singer, Councillor Glenville now works in a jewellery store in Hinckley's Castle Street.

Charities:Councillor Glenville will be raising funds for Age Concern and Air Ambulance.

Outside Interests: In her spare time Councillor Glenville enjoys walking, cycling and golf – she was Ladies Club Champion in 2012.